Who Is Greg Christman

He is the creative mind behind the new TWIAPC logo. He is also a terribly witty and prolific designer who has been turning out some incredible work over the last few years. The guy does it all. Gig posters? He does them. Commercial design? Yep, that too. Super awesome observational illustrations? Some of the best. Oh yeah, he also is one of the minds behind mycatisadick.com  END_OF_DOCUMENT_TOKEN_TO_BE_REPLACED

It’s been a while since I posted something from the fine folks at Weathervane – the progenitors of the awesome Shaking Through project. It’s not for lack of awesomeness on their behalf, they’ve been doing really wonderful stuff with the likes of Hezekiah Jones and Port St Willow, I’ve just been a little slow on catching up. However, the newest release popped up over the weekend and I feel it needs to meet your ears.

The band is Sweet Lights and the single is “You Let Me Down.” It took just one listen to really pause me. The arc of this song is patient and rich telling a tender story with real musical craft.  END_OF_DOCUMENT_TOKEN_TO_BE_REPLACED

This new cover from Philly’s Work Drugs  is such a breath of chill wave-alicious fresh air. A nice smooth disco beat underlying their take on one of the most abused and over covered songs of the summer. It’s an unusual and creative approach which I fully respect.

END_OF_DOCUMENT_TOKEN_TO_BE_REPLACED Philly is jumping on the good will bandwagon with the announcement today by WXPN, Philadelphia Folksong Society and the Trocadero that they will be presenting Philly Rocks For Haiti on February 4th. The funds raised will go to Haitian Professionals of Philly who will buy and ship supplies to Haiti. The line-up has some major players from Philly’s musical community:

This is an excellent chance to get out for a night of fabulous local music while supporting those in much greater need in Haiti.

Get Tickets here or at the Troc box office.

While catching up on my blog reading over at Slowcoustic I stumbled on the local music supporter Quarter Inch Arts. They are dedicated to promoting local music and hosting local artists at the Green Line Cafes in West Philly. They have just assembled a stellar compilation of local artists that you simply must check out. Take a gander at the list below….

Free Energy Video- A Little Something For Everyone

Free Energy dropped the first video for the song Free Energy. There is so much to love in this video. For some of you Philly folks you’ll recognize the No Libs locations and perhaps some of your favorite locals rocking out. For my fellow ’04ish Carls there’s a lot to enjoy as well (ahem Evan grooving). And for those of you who simply dig Free Energy its a really fun video that nails the vibe of the group on the head.

I pass a iron clad Well Done! To the folks over a M ss ng P eces for a job well done.

Here is another Free Energy bit for you to enjoy

Yarn: A Bluegrass Act From Brooklyn, Of Course 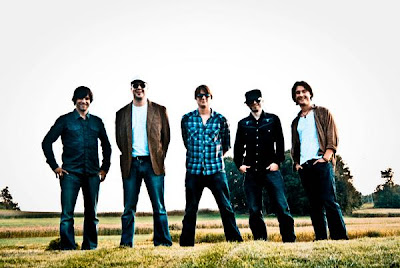 If you have a soft spot for mandolin or an affinity for well crafted country ballads you should clear your calendar for May 27th . Yarn is a rare species of bluegrass group. While they sound and look like they’re fresh outta some Georgia backwater they actually reside in the hipster/indie hotbed of Brooklyn,NY. Despite the lack of overwhelming immediate influence for a typical blue grass ballad, or perhaps because of it, they produce a sound that out does most of their cohorts on the blue grass circuit. The fella’s have been paying their dues playing all sorts of interesting venues in the north east and finally they are coming to Philadelphia to play a gig at the Tin Angel on May 27th. The venue’s intimate setting will make this show you’ll one day say “I saw Yarn at a tiny little club way back when they were getting started” and momentarily look off into the distance with that look of fond remembrance of a night incredible music. Get you ticket quick because they are sure to sell out. See you there!

Saturday night I had the pleasure of seeing DC’s Middle Distance Runner and Philly’s Drink Up Buttercup. The evening was slow to get going. We had to wait for three rather tedious singer songwriter acts to do their thing before these two acts stormed the stage.

Middle Distance Runner
First up was Middle Distance Runner. Riding a cheese steak / cheap booze high the five fellas plowed straight into their set. I feel compelled to point out that on this particular evening it appeared as though Keanu Reeves, Jason Mraz, Pete Wentz, your high school band teacher and that kid in your dorm who was a geo major and played ultimate Frisbee a lot had come together for a jam session. However, while each member had their own distinct style their sound was a fine example of well orchestrated chaos. They busted out their tracks hitting the older stuff I was familiar with like the great Man of the People and the bits off of their new EP The Unbeliever [which I promptly purchased]. Their sound was a little more punk than I had expected and I think their new release is really pushing that edge. They loose a little bit of their polish with this effort but not only do I think the change does them good I like what is suggests of future drops. They set the vibe perfectly for… 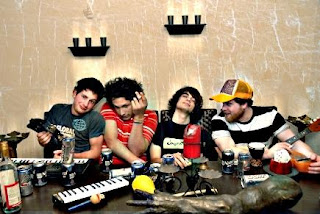 Drink Up Buttercup
These Philly favorites have been on my radar for a while and after hearing their next release will be mixed by the same guy who works with Animal Collective I’m guessing they’ll be on a lot of others radars as well. The evening was intended for them to flex some new songs in front of a crowd and just like MDR they dove right in. Let me tell you, any band that starts their set playing a trashcan will forever have a spot in my heart. Listening to their recorded work does not even come close to capturing the energy and character of Drink Up Buttercup. They are brash, loud, fun oh, and wickedly talented. They gave us a wee bit of the old (Mr Pie Eyes) stuff but, as promised, it was mostly the new stuff. It didn’t matter whether or not you’d heard it before you couldn’t help but groove to it. About 2/3rd’s through there was some snafu that was hardly noticeable to the crowd but threw a wrench in DUB’s set list but without missing a beat they grabbed their various noisemakers and came straight out into the audience. Instead of tripping up their momentum the impromptu audience participation session only pushed it to 11. There was singing, there was clapping, there was stomping, there was a grand moment of concert making. Even though the show was cut short I can’t imagine a better way to go out. I have a feeling its going to be a big year for Drink Up Buttercup.

Something In The Water

One of the reasons I chose to move to Philadelphia was the local music scene. Leaving Minneapolis’ well of phenomenal acts (LifterPuller, Atmosphere, Tapes n’ Tapes, Prince, etc. etc.) was rough but Philly’s equally rich and underrated musical culture made it an leap I was eager to make. Never would I imagine its offerings would continually awe me. What makes is even more fantastic is the affordability of shows and quality small venues. I have had the pleasure of catching some of the better known native acts ( The Roots, Dr. Dog, These United States [I consider Md part of the package]) as well as some of their lesser knowns. Since I makes my livins promoting, building and supporting small local businesses I feel compelled to spread the love to the music world.

This weekend I capped off the weekend with a show at the M Room. My friend Max’s group Deadly Technologies was performing with a strong set of openers. DT’s show was a display of robot amazingness. They are playing Lit Lounge this Thursday and if you’re in NYC you should go for a taste of their synthpop magic. One of the acts that opened for em was Chang Chang . A philly native who, with a bit of careful spelunking of the indie hip-hop scene, could turn his talent into a viable gig. His tracks are witty, boppable and intelligently honest, you can’t help but smirk when listening. He’s not the typical wrap package which is what initially grabbed me when kept me listening was his self-depreciating well thought out rhymes. The demo he gave me is further evidence there’s more than meets the eye. If he can lock in some attention with what he’s got now and continue to push himself and improve I could see him going places. Speaking of which, he and his mannequin are headed to SXSW so if you see Chang Chang on the line up stop in.

My friend Keith has been responsible for introducing me to some solid new acts lately. The first of which was Jotto, a gang of his friends who have actually turned their cliche’ college band into a viable (and touring) act. I have listened to the breadth of their work and you can hear the refinement of their talent and sound. They’re moving towards a well balanced rock sound. Their combined musical talent (and well crafted lyrics) is sturdy enough to propell their sound through a taste of synthy experimentation on their new EP Good Friend Electric. The new edge sounds good on them and pushes them into a sound that is more distinctly their own. I haven’t seen them live yet but I’m looking forward to the opportunity since I’ve heard good things about their live show as well.

Perhaps the most well know of these three is Drink Up Buttercup. These guys rock a sound that reminds me a little of later Beach Boys, mixed with some of the Manchester UK acts out there right now and a pinch of Animal Collective. What continually strikes me about their music are the strong vocals. Not to say their instrumentals aren’t tight but they obviously know the intricacies required to harmonize while building catchy riffs whithout letting either side step on the other. Even when they get a little fuzzy (in a good way) they maintain this balance which is what makes songs like Mr. Pie Eyes and Gods & Gentlemen irresistably singable. A characteristic that has made their live shows a lot of fun. They too are Austin bound for SXSW.

Here are some tasters for your listening pleasure but please PLEASE pay for the rest of their stuff. These guys are the ones who need what little cut they get from your .99!