This is banana blueberry bread. 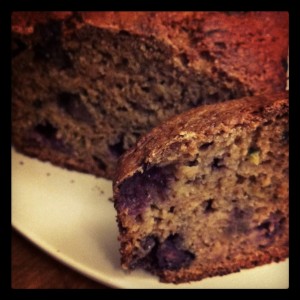 And this is Maritime 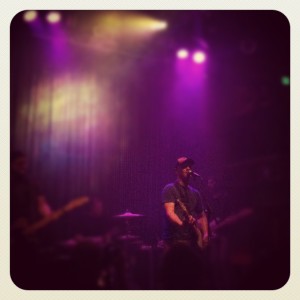 After the last week I have a greater appreciation for both. Maritime is a band I have known about for a while and enjoyed but my real true love of them was borne last Thursday when I got to see them live. It was from the stage at Johnny Brendas that the waves of their midwestern bred indie rock emanated and the full weight of their greatness hit. The group initially sprouted from the remnants of The Promise Ring and Dismemberment Plan and the post punk pop sound has definitely stuck with them but they’ve developed their own sound over the years.

When listening to their most recent album, Human Hearts – probably my favorite to date – I caught something familiar but it was only when I saw them live that I realized Maritime is exploring the space where new wave and post punk collide. Many have attempted to own only to fail by blowing it out with over indulgent echo effects and mumbled lyrics. What Maritime finds in that space, and ultimately succeeds in proving, is the potential of well constructed rhythms, tight danceable beats and witty romantic leaning lyrics. I’m gonna tell you to run, don’t walk, to get yourself the new album or, better yet, get to one of their shows.

On Saturday while I was giving Human Hearts another listen I was struck by a craving for banana bread. I also had some zucchini that needed to be used up so I decided to attempt a modified take on zucchini bread, using bananas to replace some of the fat. I didn’t knock my socks off when it first came out of the oven, but as is the case with a lot of sweet breads, the next day the flavor had developed into a deliciously subtle banana bread.

If you can wait don’t eat until the next day.