Mobley at The Mohawk in Austin 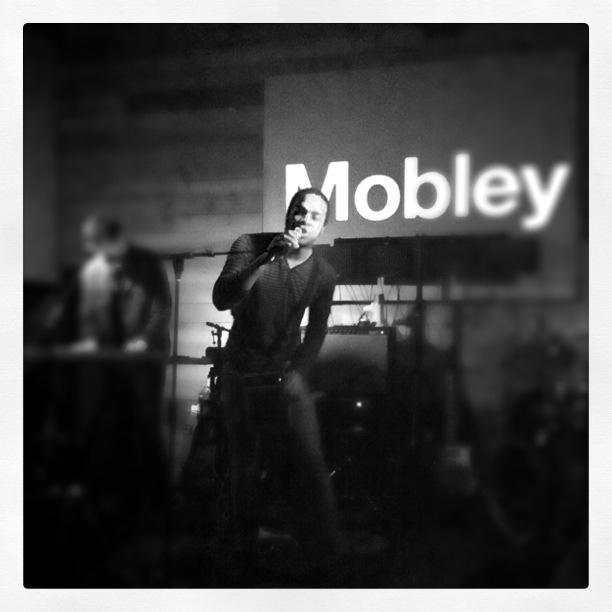 Randomly happening on a really awesome band releases some sort of odd chemical release in me probably because it happens so very rarely. Well, last Thursday while on a bar crawl in Austin with a client I got a solid dose of said chemicals when I caught local act Mobley at the Mohawk. Despite an instrumental make up similar to a lot of the other percussion heavy indie bands out there now Mobley takes a much more distinct approach. They pull the stronger musical lines from a wide assortment of genres – aggressive guitar riffs, bombarding percussion, idiosyncratic synths and pop vocal lines- and hold them together with “only as much thread as necessary for coherence.”  Originally from North Carolina Mobley’s front man Anthony Watkins even manages to infuse the music with a hint of alt-country.

Their music was enough to draw me in from the other room but their live set kept me there – even after my group had moved on to the next stop. Besides Watkins, who plays keys, drumpad, guitars and percussion Mobley consists of  Tim Shelburne, Jr on bass, keys and percussion and Sergio Trejos on drums and the trio play off each other with a level of energy that reminded me a lot of  Sharon Jones (yeah, I know it’s a strange comparison). Watkins’ presence is genuine and you can tell just by watching him there is a unusual level of intelligence behind their music.  Trejos and Shelburne are right there with him in energy and precise delivery. They carved out a set that included tracks you could tell were both new (slightly more hopped up) and old (total comfortable in the riffings etc) and was the best Thursday night bar gig I’ve seen in a very long while.

Now that I have some of their recordings in hand I’m equally enthused that they sound fantastic in record as well. Give these two tracks a listen then be sure to keep an eye out from them as I am sure they’re bound to rise quickly.